Here are today's happenings from inside that Big Brother House No Surprises Today:


Here's the latest from inside that Big Brother House of Let's Wait Until October for a Big Move:


Here's the latest from inside that Big Brother House of Misguided Malcontents:

Good evening! Ready for a blog party? While many of us already know the results of the PoV comp, tonight's television episode will focus on the  HoH comp outcome from Thursday evening including which jury member returns, as well as the nominations.

Surprisingly, the show is on time tonight despite the Barclays PGA golf (from about a mile away from where I live). I'll update this entry with the major happenings as it airs here on the East Coast. Refresh the page to get the latest. As always, the real party is in the comments area. I hope to see you there!

Already they've made the comp longer than it was in actuality.

Julia out first. Steve out. Meg out. (That's by the time the show ended although they stretched it out now.) James out. Liz out. It's down to four jurors and Vanessa. Jackie out. Becky out. Shelli out. So, John has earned his way back into the house.

Vanessa tells JM he's safe. JM says he has stuff to do. He doesn't want the others to think he might work with Vanessa. Johnny Mac is down and Vanessa is the new HoH.

Johnny Mac knows that Vanessa is the biggest liar ever, but will work with him because she's the low person on the Austwins totem pole. The twins are super upset that he's back in.

James and Meg hope Vanessa will be ready to take out one of the Austwins trio. Steve and Johnny Mac think working with Vanessa is going to give them safety this week.

Who wants to see my HoH room?
Not me. I'll pass.

Talks time. First, Austwins. She tells them that Steve and Johnny Mac are a layer of protection and she has to do what's best for her own game. She wants to target James and Meg.

James and Meg think she should target Steve because he does whatever Austwins want. Vanessa reports back to Austwins that James and Meg want to target them.

Julia wants to prank Austin because she can't get James. He laughs more than being scared, but she and Liz declare victory.

Vanessa pries James and Meg for info (dirt) on Austin. She gets some info, but not on Austin. She wants to know if they're willing to be a pawn (against Johnny Mac target). They argue over who should be a pawn ... both James and Meg offer to go up. James said he'd target Austwins. But Vanessa had wanted him to give her a reason to target Austwins (to see if she could work with them).

Good morning! Welcome to my weekly off television topic reflection of the past week in both words and photographs I've taken along the way; This post is a year 'round "feature" on the blog. If you're looking for Big Brother posts, they can all be found at this link right here. If you're not interested in this particular post, please feel free to skip on by it. I'll be posting a Big Brother blog party post coinciding with the East Coast airing of the show and, late this evening, another live feeds post. Stay tuned.

Yet another week in the (seemingly never-ending) countdown to Staycation for me. Here's some random notes on the week:
That's about it. Onto this week's photos! Clicking on an image will open it in a larger window.

But I'll love autumn temperatures a lot more! Of course, autumn has its own flowers, plus glorious fall foliage.


On Monday night, just as the 10pm train was coming in, they started the after game fireworks in Bridgewater.


Despite the local newspapers saying the fire was at 240 East Second Street, it was not. It apparently started in the attic of 640 and spread to 642. Both of those homes seem totally destroyed, with the roofs caving in on them. 644 has its siding all melted, but the building didn't catch on fire. No one was hurt. More of the fire scene photos after the jump ...


Here's the latest from inside that Big Brother House of Pancakes:


Here are today's happenings from inside that Big Brother House of Lackluster Loonies:


Here's the latest from inside that Big Brother House of Subdued Seahorse Hamsters:


After continuous circular talking throughout the day, the nominations are in.

Vanessa nominated Meg and James, as per her earlier discussions with Johnny Mac and Steve. She also conferred with Austwins about doing it. Austin was reluctant.
But, looking at the situation, it probably is her best game move to work with Steve and Johnny Mac (and possibly whichever is left over from Meg and James) to take down Austwins. She's number four with them and, with Steve and JM, they're not bonded like Austwins and the playing ground will be more of an actual "best man win" situation.

Meg is in tears on and off. James is more calm and quiet.


I should have remembered how confusing a Vanessa HoH actually is. Because she doesn't talk to us and spins her web over everyone, it's hard to tell where her mind really is on things. Here's the latest from inside that Big Brother House of So Far, No Clue They're Heading Into a Double Eviction:

After the live feeds return, this post will be updated with screen caps and ... well ... updates on the endurance comp. Who wants to wait until Sunday to find out the outcome? Not US! Refresh the page to see the latest and feel free to join in comments below!

Steve, Julia and Meg are out before the show ends.

Gah, James is out.

Johnny Mac told Vanessa she's safe with him. She promises she won't put him on the block. It's a deal.

JOHNNY MAC IS THE NEW RETURNING JUROR. VANESSA IS HOH.

Quickest and lamest endurance comp ever.
Posted by Jackie at 9:55 PM 83 comments:

Good evening! Ready for a blog party? Tonight either Steve or Johnny Mac will go to jury. But someone is due to come back from jury. It's supposed to be an endurance comp (again) tonight. A separate post for screen caps and updates on any of the happenings after the show ends will post at 10pm ET. I'll follow the comp and update, so please join me!

Before we get going, here's the latest update on the blog pool:

As the show airs here on the East Coast, I'll update this entry with the major happenings. Refresh the page to get the latest. As always, the real party is in the comments area. I hope to see you there!

After recap, Julie mentions that once again Austwins can't make up their minds. Now it's into Vanessa controlling who goes home every week. Vanessa is crying to the Austwins because Johnny Mac told her everyone wants her out. Liz approached Johnny Mac about him going to Vanessa about the five-person deal. Now they're all upset with him. He thinks they have a deal with James and Meg and he didn't feel safe.

JM figures if he can get Vanessa to keep him, he'll be safe. Vanessa tells us she will only vote the way the twins vote (they want to keep Steve). Vanessa gets cornered by Steve. He's intimidated and tells us his brain freezes. She's "hurt."

The rounds keep going. Now Liz is talking with Johnny Mac. She wants him not to go after them. Johnny Mac thinks he has a chance. Yet, they don't know if they can trust him.

Next up is a segment on James.

His friends at the bar hangout at home. He pranks his friends, too. They talk about how much James loves his cat, Gizmo ... even goes fishing with him.

It's unanimous -- Johnny Mac is gone. After the eviction, it's two battles in one as the jury members and house hamsters vie.

Jury segment ... Shelli and Jackie hanging out. Becky arrives. Oh noes, they think! Her toe is all bandaged. They see the replay of Meg slamming her head in OTEV and Liz winning the veto, then Becky's eviction.

All four are now on stage with Julie (JM is the fourth). They all go back in the house. Julie tells them that all four are back and one will return to the game. Hugs all around. @@

Head to the yard. Two epic competitions in one. HoH is up for grabs. Austin can't play. "Dizzyland" - holding onto a cable/rope - that have to hit giant hands as they hang on the cables and go around in a circle. It's kind of like the swing in a circle kiddie amusement ride. The hands are huge and padded and swing them around. The last juror standing (hanging on) stays in; all are eligible to win HoH.

Steve, Meg and Julia out already befor the show ends. 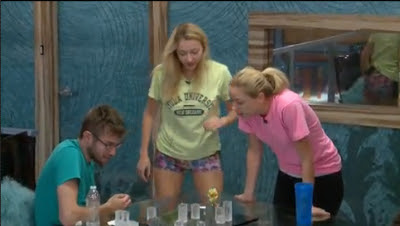 I don't have much for you. Everyone went to bed early except Steve. He walked around practicing his speech. 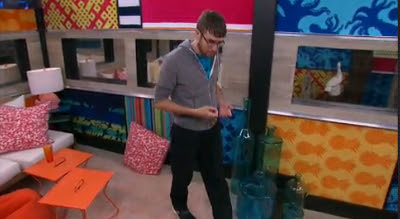 
Here's the latest from inside that Big Brother House of Waiting for Thursday: