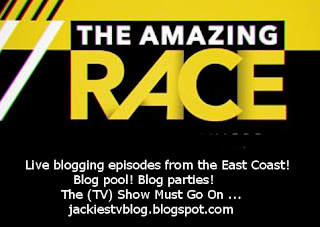 Welp, here we are at the season finale. That went by quickly, didn't it? I a bit surprised that it's only an hour show tonight. But, if memory serves, they had more than the final three going into the longer finales. It's not like Survivor or Big Brother with a reunion show following the finale. There's no jury, no voting ... just whatever team makes it to the last welcome mat wins it all.
I have not been keen on the alliance bit this season, not at all. To me, it ended up with the teams not in the alliance akin to the child chosen last in a schoolyard game pick. I understand teams occasionally helping out others or not. But, to me, the alliance dominated the game and knocked out other teams. I'm old school. I think every team needs to race on their own merits. Oh, well.
Lifeguard SueGee has updated the blog pool for the last time --
The Final Three
Hung / Chee -- Bizaro22. Glenn Allen. chrob61
Riley / Maddison -- Dr_Celine, PDX Granny, Marthalight
Will / James -- Petals, CherylNY, Nickelpeed
Philiminated:
Nathan / Cody (everyone reassigned back into pool)
Kellie / LaVonne -- David, ChicMc, Sharon N
Jerry / Frank -- Donna NY, Monty924, Andi, Willie J
Michelle / Victoria -- Mario L, Jackie, SueGee
Alana / Leo -- Jennasmom, Sharon C, Donna in FL
Kaylynn / Haley -- Jennifer, Indiana Jane, Ed in Ohio
Aparna / Eswar -- Cheryl in NC, Kelsey NY, Skyriverblue
Gary / DeAngelo -- JLaf, CherryPie, Judy Sweeney
I will be updating this entry with the major happenings as they air here on the East Coast. Please refresh the page to get the latest news! As always, the real party is in the comments area. Feel free to join in on the discussion! May the best team win!
We're getting a brief recap of the season. Yes, the alliance of three made it to the final leg together. We know that.
Teams are flying to New Orleans. Party on Bourbon Street, so they're heading to the French Quarter. They have more luxury on their flight than I've ever seen!
They're heading to Louis Armstrong Park. All teams flew there together.
Route info cards gotten. They have to collect 50 red and 50 gold necklaces thrown on Bourbon Street to get their next clue. The necklaces have to match the ones the Grand Marshall is wearing. The Beard Bros are lost.
James and Will finish the beads first.
Who will be left holding the baby? Next up they have to find the baby in the cake for their next clue. That's a tradition in which a small (not real!) baby is baked in a large King Cake. This will be a needle in a haystack kind of Roadblock.
James/Will found the baby first and then had to sit and eat a ton (or six) of gooey pastry beignets.
They head to the New Orleans Convention Center next. Will/James remain in the lead.
Roadblock. Climb under a bridge, then onto a beam, then jump out about 200 feet over the Mississippi River to grab a clue. Crescent City Convention Bridge.
Beard Brothers still in last.
Both team members must rappel back down from the bridge. Then they have to roll a ten foot ball back through town.
James/Will at the ball. Hung/Chee headed to the ball. Maddison/Riley just finished finding the baby.
Next they have to search a warehouse for puzzle pieces and make a globe out of their ball.
James/Will finish the globe and they're the first team heading to the finish line at the New Orleans Superdome.
JAMES/WILL WIN THE AMAZING RACE! And we have a down on one knee marriage proposal.
Hung and Chee come in second place.
We know who's on third.
And, there they are -- Riley and Maddison.
This season put the show over 1,000,000 miles raced.
Posted by Jackie at 7:56 PM

Hi Jackie and all who follows. I am in the Finals. Go Hung and Chee.

Hi Ms Jackie - hope you are fairing well in the Nor'Easter!

Howdy everybody!!! Good luck to those still in the running for the pool!

this is the closest I've been to a final!

Not a problem, Petals. Thank you for the donations you've previously made!

Hi Glenn and Petals and of course Jackie & Vincent

I just had Chinese food delivered so dig in!!

I'm hoping they don't break in for snow updates here. They're acting like we've never had a big snowstorm before.

I would never have selected this team for myself, but I guess Will/James are good people. I usually root for the father/sons, etc.

I had the best "win" today when Roger Federer was Forbes highest-paid athlete in 2020; he only played 1 tourney! (I am low on good things, so this was like a tiny gift)

Hope all of Jackie's peeps are doing well! ♥

Hi Sue! Thanks for managing the pool.

I think we will have to wait a while for a new show to watch together. Big Brother maybe?

isn't it strange to watch everyone all packed together?

Hi Moleman I thought I was missing someone

Hi Jackie and Vincent. Thank you for blogging. It's a blast.

up here, the bakeries do a King Cake but put the baby on top (choking hazard @@)

hey, it's no fun if someone doesn't choke, right? LOL

YUM...I think I could do 6 beignets

the baby is about the size of MY thumb (small). That would suck, searching for it.

The one time I was in New Orleans, it was the week after Marti Gras...lots of garbage and great deals on souvenirs! Oh the food was so good

Would need the coffee to do the beignets!!

I'm hoping the next Amazing Race won't have a super alliance like they did in this one. You can be a great player, but the super alliance will knock you out.

The pastries are just half the goo, the tables at the Cafe du Mond are permanently sticky too LOL

I wonder if the next Amazing Race will be an All Stars one. The last Survivor was Winners and Big Brother was Allstars

I think of the 3 shows, Amazing Race will be the last to come back with all the travel restrictions. I can see the other shows doing shots and/or sequester to get a cast

Another TAR staple, 'fear of heights'

They need a hamster bubble.

WHOOOOOOO he got the clue!

Penny yes I'm with you on the Packzis!

The other teams are so far behind.

I told my husband it was Packzis, but he was sure it was spelled Paczi. I should have looked it up. LOL

Yes, they did, Petals.

I think it's spelled both ways Penny

That puzzle looks hard, especially with the all blue ocean pieces

I have never heard of the packzis - but a quick Google shows pictures...Polish donuts!

omgosh...is a pool team of mine actually gonna win?


I win a Grand right? LOL

Kind of a early finish!

Well done, they put the alliance together!

That's why the early finish

Yes, SueGee, all kinds of fillings. Glazed and confectioner's sugar. I love the powdered ones.


Thank You Jackie! And Vincent!
And if I don't "see" the rest of you: MERRY CHRISTMAS & BLESSED NEW YEAR.

Good for hung and chee, they were good!

Goodnight everyone!! See you soon!!

Good luck Jackie on Friday!! You will not believe the change after the surgery!!!

G'nite All! Until Next time. Merry Christmas...enjoy the Holidays.

And Thank You Jackie & SueGee!

Good for riley and maddison,mabye if they were up against easier teams in the final they could have done better!

Thanks for coming by! Be safe!

Thank you Jackie. You are so wonderful for doing this. Until next time, everyone! Be safe!

What's on sale at Tada?