I realize I've let you all down this season and I apologize. I am still a bit lost on the show having missed its first few episodes and only seeing parts of others. However, I should recover enough to handle Big Brother when it comes around.

Yep, I still don't know what's going on so much on the show. I did watch the two hour show last week. However, I'm still no good on names or what's gone down in the past.

Healthwise, slow but sure, I guess. I've become pretty decent with the wheelchair.

I am home now. However, between my health issues and the fact that I remain mostly clueless about this season, it will be a loss for me. I hope my health is back on track for BB.

Yes, I am still locked up in the nursing home all but away from internet and dependent on my cell phone. I still haven't been able to watch a whole episode without interruption.  But feel free to post away ...

I am still laid up and not near my computer. Feel free to talk about the show in the comments.

I am still in skilled nursing. I am posting this so you have a place to gather. Please try to post an update or two.  I would appreciate it.

I cannot blog the show  but here is a place for you to gather.

No pool this season unless you all can coordinate and run it in comments. Very little internet as well as very bad health here. I cannot do well on a phone with real spotty wifi.

I am in the hospital. Just had emergency foot surgery. Not really awake. Won't be able to blog show. opening this up so you can party. Morphine is not conducive to blogging on a phone when I normally do it on a computer.

Please remember I do have a PayPal and could use a bit of help now! Thank you. 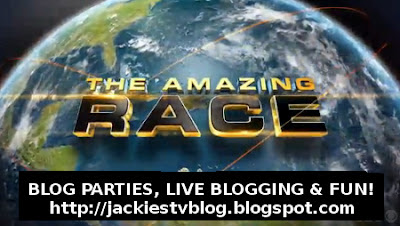 Although we're beginning the show with only four teams still in it, it doesn't seem that this is the penultimate episode of the season. They still haven't announced the finale date. Hmm.

I will be live-blogging the show as it airs here on the East Coast, constantly updating this post with the major happenings. Refresh the page to get the latest news. As always, the real party is in the comments area. I hope to see you there!

But, first ... Lifeguard SueGee has updated the blog pool. Here's where we stand:

We get a recap. Of course.

They get to stay in Greece and choose their hotel on Travelocity.

Teams will be driving 30 miles north to the next clue. Raquel/Cayla and Kim/Penn leave with their 15-minute time advantage. The second two teams leave together, no third group this week.

Roadblock - Kim/Penn there first. Search leaving no stone unturned. Must find one of four gold coins hidden under rocks. The other teams seem to be a bit lost trying to find the site.

Cayla found the first one! Find Socrates at a tower. Listen to his words of wisdom to get your next clue. Kim finally found one! Arun got one!

Socrates gives them a Detour --  Deliver 300 plates or break plates only when a band is playing until they find the clue to the next Pit Stop.

Both Cayla/Raquel and Kim/Penn choose breaking. Dusty finally found the gold coin after two teams were already checked in at the Pit Stop.

The girls finish breaking plates and are headed to the Pit Stop at White Tower.

2. Kim/Penn (Phil tells them 3 departure times next leg, they will be in the second.)

Arun/Natalia got lost and now Dusty/Ryan are about even with them on the Detour task. Natalia gets the clue first. Both of the last teams are heading to the Pit Stop.

Next week is the two-hour season finale. 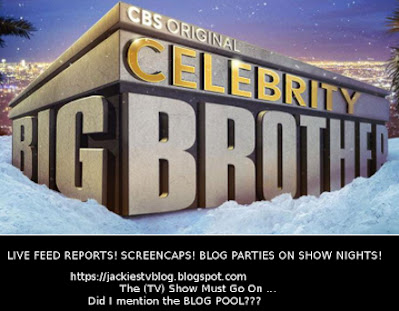 Good evening! Here we are ... the season finale after several years, er, days in the house of "celebrities" most of whom might be considered that in very limited arenas. The final three aren't quite what I expected at the beginning. But, two out of the three don't surprise me at all now at the end of the season.

I haven't reported on the live feeds because it's been Todrick non-stop talking about himself and shuffling cards. There have been no spoilers coming from within the house.

On the other hand ... unlike regular BB which has its jurors sequestered and even monitored to quell discussions of the hamsters, CBB lets them out into the world. And, to social media. LOTS of stuff has gone down on Twitter.

Lifeguard SueGee has updated the blog pool for the final time and here's where we stand:

I will be live-blogging the show, regularly updating this entry with the major happenings as they air here on the East Coast. Refresh the page to get the latest news! As always, the real party is in the comments area. I hope to see you there!

Julie is dressed in a dress with a diagonal hem. Okay. Previously on is on ...

Into after Todd was evicted. Miesha thinks it will be Todrick and herself in the final two. Todrick confesses to Cynthia that he's BB superfan. That's actually the only reason I "knew" Todrick -- not as a celebrity, but as the guy who invited BB23 hamsters to his house. It was all over Twitter.

Todrick works on Cynthia to take him to the final two if that needs to happen.

The HOH screen shot has them in booths in a snowy scene.

No need to go on as no one can win except Miesha. Miesha is the final HOH!

To the living room and Miesha's decision.

Cynthia - Ride amazing, already feel like I won. Played with loyalty, proud of you both.

Todrick - Time of my life with you as my ride or die. You're incredible. Etc.

Miesha evicts Cynthia, no surprise there.

Text 21523 America Votes in case of a tie breaker starting now. Either Miesha or Todrick.

To the jury -- Carson apologizes to Shanna. Cynthia comes out as Juror 08.

To the final two and why they should win.

Miesha - Didn't prepare a lot. Planned to beast competitions. Wanted to play with integrity. Thank you.

Todrick - Game plan was to lay low. Blood on his hands each week. Cookout inspired him. Love the game. Not based on how many comps you win. Never on the block. Want to make art for my community.

Teddi - Wizard of Oz, we can see behind the curtain
Mirai - Appreciation for competition winning
Chris - Integrity for my son
Shanna - Will never have to hear your voice again
Carson - The one who worked it harder
Lamar - Got a tattoo, going with the person who resembles that mentality
Todd - Refers to the live feeds and talking trash about people who were gone.
Cynthia - Vote for the person who helped me navigate how the show works.

Chris Kattan arrives but did not vote.

MEISHA WINS! The unread votes were also for Miesha.